The following contains images of atrocity. You are seriously advised to think twice before scrolling down — and before supporting what you wrongly think of as ‘your side’…

HeadChopper: Okay; how many have we managed to get?

HeadChopper: Oh, this is pathetic! This has to be the worst one we’ve ever done!

HeartEater: Look, it’s getting too dangerous out there. Plus, the parents don’t believe us anymore. It’s not like the old days at all.

HeadChopper: So how are we going to pose these?

HeartEater: Depends how they’re meant to have died. What gas is it this time?

HeadChopper: I think we agreed on nerve agent. It’s trending at the moment. Foreign media will go mad for it.

HeartEater: What are the signs and symptoms?

HeadChopper: Well, from what I can gather, you do a bit of driving, have a drink, eat lunch, then after you’ve been ill for a month you emerge with greatly improved English.

HeartEater: Look, why don’t we do a mixture of nerve agent and chlorine? That covers more bases — you know, ‘something old, something new’… Plus, it sounds really savage. Remember: if we don’t get the Yanks carpet-bombing this time, we’re completely finished. And I for one am not not quite ready to get my 72 virgins. Now help me position these bodies. My back still hurts after the last lot.

HeadChopper: All right: how’s that?

HeadChopper: What’s the problem with that? Dead kids play well with foreigners operating with a racist notion of the murderous oriental ‘Other’…

HeartEater: But there’s never anyone who looks like us. Bashar should be gassing jihadis occasionally, you know!

HeartEater: Look, how are we going to maintain the fiction that Assad is an evil madman gassing every jihadi-controlled town and city, if we keep putting out photos that only have women and children in them?

HeadChopper: But women and children are easier to…

HeartEater: Look, lie down over there as if you’re dead, and I’ll take some more pictures. And don’t forget to put some shaving foam on your mouth and nose…

HeadChopper: I’m not lying down in that! Some of them have been dead for days.

HeartEater: Oh, this is a disaster. Come on, admit it: we’re finished.

HeadChopper: We are not finished. I keep telling you: we’re golden. Think of who’s supporting us!

HeartEater: No-one is supporting us!

HeartEater: Apart from the US.

HeartEater: But you know what they’re like: they’ll drop us in an instant if it suits them. And when we’re defeated, the world will find out everything we’ve been doing. They’ll discover the torture chambers, the poison gas labs, the mass graves, the mountains of Western weapons, the oil deals, the huge underground tunnels, the laundered money, the video editing studios, the hoarded medical supplies, the organ harvesting rackets, the food scams, the dismantled factories, the presence and participation of everyone’s ‘special forces’, the Israeli money, arms and medical aid… And every damn Syrian we’ve left alive will be blabbing about the things they’ve seen over the last seven years…

HeadChopper: This is exactly why our backers will have to intervene. You watch: a fortnight at the most. Now be quiet and let me get the pics uploaded — using that magnificently fast internet connection that somehow continues to operate in every shattered city we control…

HeartEater: Did you get a bearded male of military age, by any chance?

BabyKiller: What? No. But I managed to grab someone’s little baby.

HeadChopper: Have you killed it?

HeadChopper: All right, bring it over here.

HeartEater: You can’t use that!

HeadChopper: You gone squeamish all of a sudden?

HeartEater: Well, the more the photos differ from each other, the more obvious it is that this is a staged scene with people moving bodies around. We upload multiple versions of a supposed gas attack and the world will start to see that all this is just an ongoing, low-budget fraud perpetrated by murderous psychopaths with the aim of justifying a full-scale Western assault that will hand them the country on a plate…

HeadChopper: Calm down. It doesn’t matter what’s wrong with the photos: no-one is going to notice a thing.

HeadChopper: Because it won’t get reported that way, that’s why not. We’ve got the media, remember? There’s no way a media plugged into Western power and money is going to start telling the truth about what the West and its proxies are doing in a non-compliant target country. You really think someone like Lyse Doucet is going to pop up on the World Service saying “Oddly, the photographs appear to contradict each other, and the video evidence seems inconsistent”…? It’s completely impossible, okay?

BabyKiller: That was quite a good impression. Can you do your John Simpson?

HeadChopper: No. We haven’t got time. He talks too slowly.

HeartEater: That is really good, you know. When we get to the UK you could probably go on tour with that.

HeadChopper: All right. Come on, put that baby on there.

BabyKiller: Where do you want it…?

HeadChopper: Oh, just chuck the thing on the top and I’ll get the photo…

HeartEater: Uh, pardon me for saying; but I don’t think that quite works…

BabyKiller: What do you mean?

HeartEater: Well, it looks exactly like someone just chucked a dead baby on the top for maximum effect…

HeadChopper: All right, tell you what. See that corridor at the back? Take the baby down there and dump it next to the washing machine…

BabyKiller: I love it! Domesticity and tragedy — all in one image! It’s brilliant! 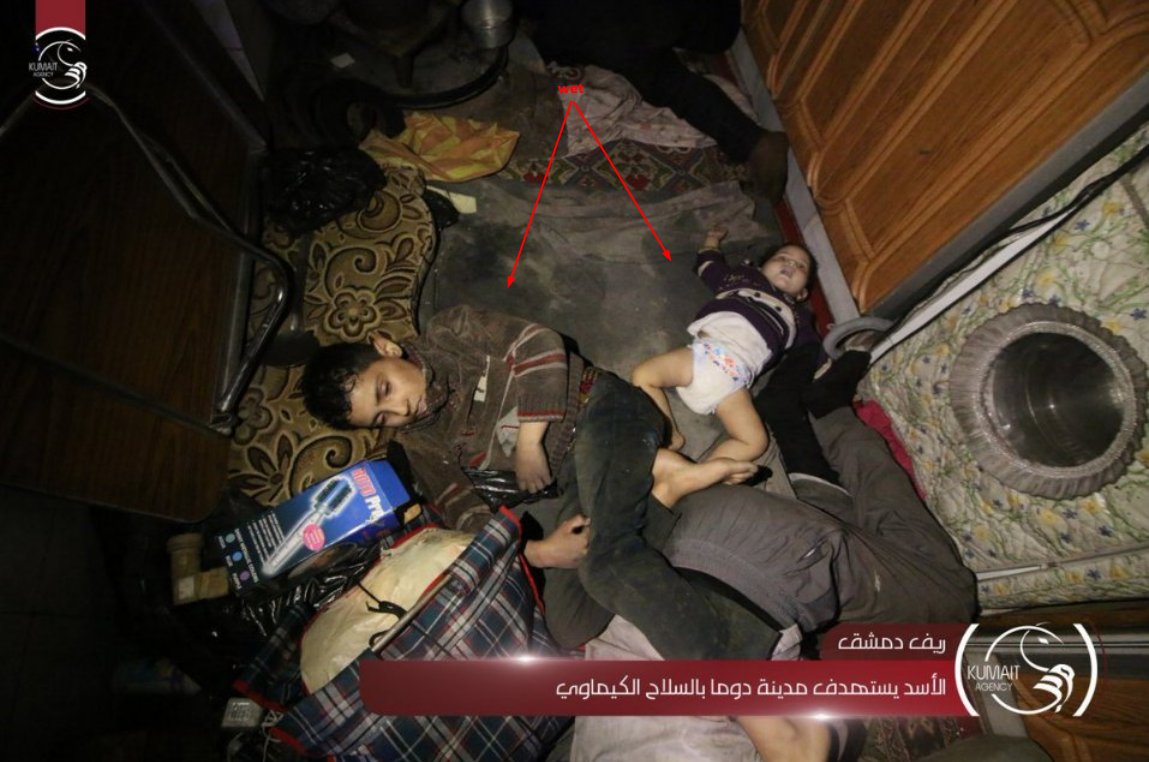 HeartEater: Of course, all this does very much depend on there not being anyone smart enough to notice the same bodies showing up in different positions…

HeadChopper: Okay, everyone: that’s the photos done! Now, let’s all get the hell out of here. Make sure you avoid the booby traps by the door. And don’t forget your white helmets.