I know for a fact that at least one good friend of mine has a tendency to be a bit annoyed by the way this ‘Friday Film’ series frustrates his legitimate expectations. And I acknowledge that he has a point: it is indeed the case that these electronic pages are littered with ‘promissory notes’ that are not redeemed: there are threads that break off; stitches that are dropped; ends that are loose. It’s true; I can’t deny it.

And the principal reasons for this state of affairs are quite simply explained: not only is my (non-writing) working week regularly longer than 50 hours — which, with commuting, doesn’t leave a lot of time free for food and sleep, let alone putting thoughts and videos into a laptop — but, in addition, when (as happens not seldom), a music-related posting gets fewer than 20 readers in its entire first week, I’m inclined to drop the planned sequel altogether and simply get more sleep. I actually carry a notebook with me most days, so whenever I have a coffee break or a bus journey I can collect the thoughts that need to go in the next ‘Friday Film’ … but, if it turns out that hardly anyone has wanted to read the previous one, the notebook is where those thoughts stay. A film-music posting from a few weeks ago, complete with interesting clips and original commentary — and don’t pretend otherwise! — took nine whole days to be seen by 21 people. What’s the point?

Well, on this occasion, the point is that, having uploaded ‘Friday Film (80)’ — 13 readers in 13 days, in case you’re wondering — and then left ‘Friday Film (81)’ in the notebook, I’m writing ‘Friday Film (82)’ because I have two specific readers in mind, and I know perfectly well that they — the dedicatees, as it were! — will read and hear everything in it. My net-buddy Simon is interested in Joseph Stalin and how he is written about and represented — while my kind-of work colleague MHH isn’t remotely interested in Shostakovich. This posting manages to be for both of them.

One of the ‘dropped threads’ from the other week was connected with orchestral film music that incorporates soloistic, ‘concerto-like’ use of a piano. There are some interesting things to be said about this film-musical phenomenon; and most of them I’m now not going to bother saying. What I am going to do is present a short Shostakovich piece that manages to be both widely despised and fairly frequently played and recorded. And I’m not kidding about the ‘despised’, either. Not so many years ago, in fact, I even saw it nominated for someone’s imaginary Classic FM ‘Hall of Shame’; my bet, however, is that MHH will find it considerably more attractive than the ‘dissonant’ Shostakovich from which she normally recoils…

The piece is always billed as The Assault on Beautiful Gorky; but this is actually an uncomprehending mistranslation. The music appears in the 1951 Soviet film The Unforgettable Year 1919 — where it accompanies an attack, not on the ancient city of Gorky (which in 1919 was still ‘Nizhny Novgorod’: it wasn’t ‘Gorky’ until 1932), but on the coastal artillery fortress of Krasnaya Gorka — which was within bombarding distance of Petrograd (St Petersburg) and, during the Russian Civil War of 1917-22, the site of a short-lived mutiny against the ruling Bolsheviks. (Yes, to this extent, the film is sort of a ‘mirror-image’ of Battleship Potemkin.) As for that mistranslation, it’s not hard to see how it happened: ‘krasnaya‘ is a word with a complex past, as it were. Nowadays, it means ‘red’ (what we know as ‘Red Square’ is, to a transliterating Russian, ‘Krásnaya plóshchad‘); in the old Russian language, on the other hand, krasnaya meant ‘beautiful’. Which means that someone trying to render the music’s title into a species of English saw the name ‘Krasnaya Gorka’ … and decided that the ‘Gorka’ was a typo that needed fixing, and the ‘Krasnaya’ was an adjective to be translated in some way which didn’t imply that the Bolsheviks were attacking themselves… 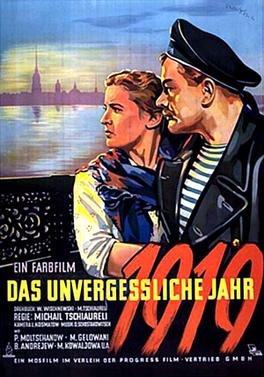 This is, then, another example of Shostakovich’s film music — though, if I am to be honest (and stick my neck out a little, musicologically speaking), I’ve never felt remotely inclined to believe that the composer wrote out all those thousands of little notes just for a score that he knew was going to have battlefield sound-effects slathered all over it. The very first time I heard the piece — literally decades ago: I think I was barely out of my teens — I assumed that it was an old fragment Shostakovich had lying around and decided to make use of. Whether ‘Shostakovich studies’ have confirmed or contradicted this impression in the meantime, I really don’t know; it would be fun to find out.

As with Fall of Berlin, then (which I talked about the other day; see here), the film depicts an episode in Soviet history — and, likewise, allows itself a degree of independence from the historical record where Stalin is concerned. Here, especially for Simon, is a joyfully ahistorical sequence that shows Stalin journeying to Petrograd — on Lenin’s instruction — to take fearless charge of the demoralised forces facing the counter-revolutionary White Army of General Yudenich. (No, Stalin never did any of this — he wasn’t even there — but what do you care? I’m prepared to bet that you watched U-571 — in which the British capture of a WW2 ‘Enigma’ code machine was transformed into a chronologically impossible all-American operation — and you didn’t laugh out loud once…)

Do take note of the terrific armoured train, by the way: you’ll be seeing it again later…

[[Yes, that’s Mikheil Gelovani being Stalin once more — here (in 1950, at the age of 58) playing a 41-year-old Stalin … 26 years younger than the 67-year-old Stalin he had portrayed a couple of years earlier in Fall of Berlin…  (“Stalin looked very fakey”, wrote MHH after she saw that clip the other day. And is it any wonder?)]]

What we haven’t seen so far is that actual ‘Assault on Beautiful Gorky’, I mean on the distinctly unbeautiful Krasnaya Gorka. To my mind — which, remember, is a mind exceedingly intolerant of conventional ‘war films’ and ‘battle sequences’ — it is a remarkable, even unique scene from the point of view of the musical accompaniment of military violence. See if you agree…

Well, there we are: a classical-music-related posting that has ‘something for everyone’ — thanks to that ‘everyone’ being an intended readership of two people known to the author.

Everyone else: go and watch Eurovision. We all know you prefer it.