Anyone who saw and enjoyed my ‘City of Dreams‘ posting of two or three weeks ago will be interested to know that its combination of footage from early 1900s Vienna and music written by Arnold Schoenberg in those very same years has proved highly popular. Even the fact that I — in my amateurish attempt to remove the ‘early cinema’ jerkiness! — had slowed down the films a little too much was something that many people actually liked: there was quite a bit of private feedback in which folks said that they appreciated having slightly more time to scan the locations and ‘read’ the people’s movements and expressions, and that the slight shortfall in ‘everyday realism’ somehow placed the visuals ‘on the same plane’ as the unfamiliar, searching music (for brevity’s sake I am paraphrasing and condensing a lot here). So, if no-one objects, I’ll leave my re-processed versions exactly as they are…

Something else that I discovered from the feedback is that people were interested in seeing more such juxtapositions of documentary clips and contemporaneous art music: ‘Do you have other such films?’, I was asked more than once.

But here, I’m afraid, I have to disappoint everyone. I’d love to show more footage from old Vienna — or anywhere else of music-historical relevance! — but, while there is a fair amount of old film knocking about on YouTube (do some googling and see for yourself…), I’ve not found anything that suits my purposes quite as well as do those two clips.

For one thing, if a compilation is of indeterminate date, or covers lots of different dates, or isn’t sufficiently clear or close-up to show people’s actual faces and expressions, or shows more than one town or city, then it simply isn’t very useful to me, however interesting and even moving it is. Likewise if the location doesn’t have a clear musical connection: there is some remarkable footage around showing Burnley and Halifax from years around the time of Queen Victoria’s death — but since I don’t know of any music that was written in those places in those years, my specific requirements are not met. It just wouldn’t feel right for me to try and ‘contextualise’ a piece of Elgar, say, using images of some city that he may never even have seen… 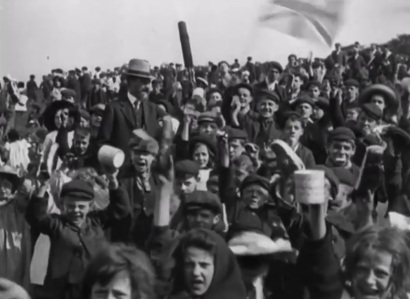 And, in fact, there’s another consideration that gets in the way of my using British footage from that era — and this is that I don’t much like seeing the sheer degree of social stratification that tends to be visible in it. For while one can view hours of pre-WW1 footage from Vienna or Berlin without being made uncomfortably aware of an underclass whose lives and fates — their exploitable usefulness aside! — are of literally no concern to the society’s ruling elites, it seems that pretty well any piece of early British film shot in an industrial or urban setting will be full of such reminders. If you can stomach the sight of ‘Union Jacks’ being enthusiastically waved by children who don’t look as if they have even one square meal a day and whose path to the factory gate or the killing fields of empire will have been prescribed with the most savage ease, then you have a much greater tolerance of plutocratic sociopathy than I do. For the rest, if I ever feel the need to gaze upon a scene where private capital runs omnicidally amok, and quintessentially Victorian levels of inequality rub shoulders with an Edwardian indulgence of ostentatious display, then all I have to do is look out of my window.

But there is one more problem that attaches to the kind of footage that comes down to us from those times past, and that is the extent to which it can be fraudulent — by which I mean, faked, staged, deliberately ‘set up’: film whose interest and significance rests upon its documentary ‘genuineness’ turns out to include elements that a modern eye recognises as ‘obviously worked out in advance’.

The Vienna film from 1906, ‘genuine’ though most of it looks, actually contains one little part that, with the passage of these several weeks, has more and more come to seem to me to be … a little bit suspect. (If anyone, re-viewing that item with this in mind, thinks they can tell what I mean, then post a ‘Comment’ to that effect, and we can discuss it further…) But for a much more prominent set of examples of what I’m talking about, I can turn to a different film entirely…

Now, before I say anything about it, I want to point out that I know nothing about it — literally: a pal of mine shared it via ‘social media’ a little while ago, and I picked it up and slowed it down in what is now my customary manner. What’s more, I’d like to offer everyone the chance to make their own way through it before I discuss it.

Let me stress: I’m not for a minute implying that it contains ‘nothing of value’, even from the standpoint of my own oddball ‘old footage’ agenda — so let me make the most of its possible significance in the way I like to. All you have to do is start the rather lovely music video located below — and then, when you feel inclined, start the film clip located below that: the Paris of 1928 that was well known to Maurice Ravel will appear to the accompaniment of a piece of music that he composed in that year…

And now the discussion.

The first thing I want to say is that I don’t know where this film comes from. Every version of it that I can find online is not only without proper identifying details, but also comes from the same copy — which is evidently a videotape transfer, in view of the bit of untrackably damaged tape located at the same point in all of them. What’s more, someone or other has an active copyright claim on the footage — since any upload to YouTube gets electronically booted off again within, literally, moments. On top of this, what we see is something that has clearly been repackaged closer to our own time: a film called ‘Rues de Paris‘ that was shot in 1928 simply would not have had the date ‘1928‘ appear as part of its original title.

Then there is the fact that, to a significant extent, this is a movie: the boring and irrelevant ‘stickler for discipline’ stuff at the start is obviously scripted, worked out in sufficient detail that continuity can be assembled from shots of different performances filmed from different angles. Likewise in the case of all those scenes — the faffing of a woman getting off the bus; the little kids crossing the road — where a shot from one direction is followed by a shot from the ‘reverse angle’: someone had to stop the action; relocate the camera; and then try and get the action going again without too much obvious loss of continuity. And then there are all the people who have clearly been instructed ‘not to look at the camera’ as, for example, they cycle along with a cigarette characterfully held between their lips: ‘genuine’ passers-by have absolutely no difficulty seeing the camera — and, as you will have observed, sometimes behave accordingly.

And that nonsense with the policeman and the delivery tricycle, with the bus neatly in the background and all that screen space carefully laid out…? Don’t make me laugh…

Needless to say, some of the shots are obviously genuine and proportionately lovely. No-one could possibly have manipulated that meeting between one tram, 16 buses and 29 cars; and various shots of people on the pavements really do feel as if they give us a glimpse of the streets walked by Ravel and his audience. And just look at that beautiful parked car!

Still, I think there is enough in it to make this film worth seeing ‘with music attached’, in spite of everything that has to be considered ‘suspect’ from a documentary-historical point of view.

Which brings me to my Epilogue…

This posting — an examination and discussion of sneakily dishonest and manipulative film-making — I hereby dedicate to the memory of Victor Lewis-Smith’s BBC career.

No, I’m not being any kind of smart-arse. Nowadays a producer and broadcaster of some reputation, Victor Lewis-Smith got to York University — and then to BBC Radio York — just a little while before I did, back in the 1980s. Though we never actually met — and still haven’t! — we had friends and enemies in common in York’s musical, broadcasting and journalistic circles; and over the years I’ve remained aware of things he has done.

Now he has done something that — to my certain knowledge! — no-one with anything to lose has previously been prepared to do: he has made a stand concerning the manifestly fraudulent ‘documentary’ that the BBC’s ‘Panorama’ unit put out in 2013 under the manipulative title ‘Saving Syria’s Children‘.

What happened was that just the other week, citizen journalist Daniel Margrain brought to Lewis-Smith’s attention Robert Stuart’s ongoing investigation into this programme’s contents and production….

And, experienced film and VT editor that he is, it didn’t take Lewis-Smith long to decide that the programme required the most serious professional scrutiny. His various public thoughts, requests and demands led — eventually! — to the release of a ‘statement’ by the BBC … and to Lewis-Smith then ripping up, on camera, his contract to produce a programme for a Corporation he no longer felt prepared to work for.

A properly documented account of this latest chapter in the ongoing — and, of course, unreported — story can be found here.

And, as you read it, ponder the sacrifice that this media insider has made in the service of journalistic truth. Just as that BBC contract will not be the only one that he loses, so will the BBC be far from the only power-serving institution which never forgets that Lewis-Smith has visibly stood in the way of those utterly amoral interests that together constitute the ‘warfare state’.

For what it’s worth: in my own undetectable and insignificant way, I’ll stand with him.