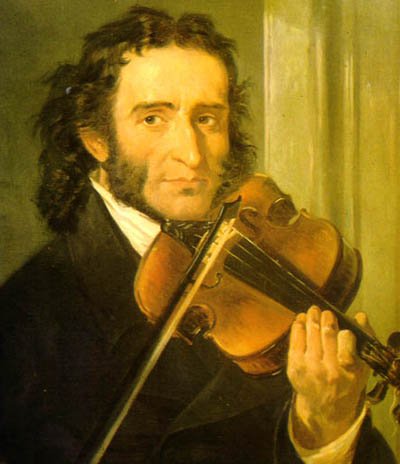 All right: there’s 35 minutes to go before my bedtime, and I can feel a high-speed posting coming on — motivated by the fact that I’ve just this minute seen someone mention online that today is the birthday of history’s most famous violin virtuoso: Niccolò Paganini (1782-1840).

The slightly spooky thing here is that earlier today I was actually thinking about something connected with Paganini — who is a performer-composer I think about only very occasionally, and whose birthday I couldn’t have told you, even if I’d wanted to. All of which pre-Halloween creepiness is really rather appropriate, when you recall that, as a violinist, Paganini’s potent combination of startling technical innovation and breathtaking physical virtuosity — allied with a somewhat cadaverous appearance (caused by a life of chronic ill-health) — led to the propagation of a rumour that he had made a pact with the Devil…

So, casting aside all elements of credulousness and superstition, let me start with what was on my mind earlier, and then we’ll get to the celebratory example at the end — at which point everything will fall into place, and I can go to sleep.

What happened earlier today was that I was pondering the music that for decades was the theme for ‘The South Bank Show’ (and possibly still is: I don’t have access to the ‘Sky Arts’ channel — where it’s ended up — so I don’t know).

As many readers will think they know, the show’s music was/is this:

The reason I said ‘will think they know’ is that this isn’t everything that ITV viewers heard when the programmes were shown. What we all heard, Sunday after Sunday, was a slightly longer piece of music:

Now, the reason why I was thinking about all this is that I was making a mental list of pieces (and parts of pieces…) that, in musical terms, actually work better in the form of snippets cut together for use in TV programmes and commercials than they do in their original form — and I was wondering if this particular piece ought to be among them. You see, I happen to know (thanks to a library LP I borrowed decades ago) that, while this theme music comes from the Andrew Lloyd Webber Variations — composed in 1977 and released on record in 1978 (with Julian Lloyd Webber playing the cello part) — it is the case that the continuous stretch of music we hear in the TV theme does not actually occur as such anywhere in the album. To clarify what I mean, let me go back to that album and start off with the famous ‘vamping’ accompaniment heard at the very start of the show — and then leave the piece to progress for a couple of minutes as it actually does on the record…

Back when I first realised this (I’m talking about the early 1980s, when I was still at school and borrowing from three record libraries every week…), I just assumed that someone in TV land had done a few really clever bits of work with a razor blade and sticky tape (which was how recordings were edited all those years ago: there was no ‘digital editing’ — or, indeed, digital anything else). What I didn’t notice until the era of Wikipedia and YouTube is that (i) the album didn’t come out until November 1978 — which is almost a year after the first episode of ‘The South Bank Show’ was aired in the January of that year; (ii) the recordings do not — at least to my ears — sound as if they can both come from the same performance, even allowing for the various possibilities of studio editing and re-mixing; and (iii) there’s a tiny article in the tax-dodging-billionaire-owned Daily Telegraph which contains a quote (admittedly ambiguous in this respect) from Julian Lloyd Webber in which he says that the cancelling of the programme in 2009 would not be costing him anything in broadcasting royalties as “[he] did it for a one-off payment”. In other words, it does look like the TV theme was adapted and recorded specially (or, at the very least, separately) … and if I can corroborate that in any way, you will be the first to know about it.

What all this has to do with Paganini is easily explained: Andrew Lloyd Webber’s Variations are, as a matter of precise musicological fact, variations on the piece that is Paganini’s ’24th Caprice’ — the last in a set that was probably composed as long ago as 1817. According to its Wikipedia entry, the 24th Caprice — which consists of a theme, 11 variations, and a finale — ‘is widely considered one of the most difficult pieces ever written for the solo violin’. And, once you’ve watched this clip, you’ll know why: yes, I’ve found a video that lets you see as well as hear just how amazing it all is…

And as my ‘parting shot’, allow me to conjure up in your mind a wholly imaginary world … in which our national broadcaster — which tonight frittered away no less than 70 minutes of BBC Four’s publicly funded existence on two(!) re-screenings of a sclerotic 1982 ‘Top of the Pops’ show that featured Captain Sensible, Bananarama, and Bucks Fizz — had managed to find five whole minutes on one — any one at all! — of its several TV channels to show this little piece being played. No big deal. No great fanfare. Not even any detailed explanation. Just something people might like to see and hear. On its composer’s birthday.