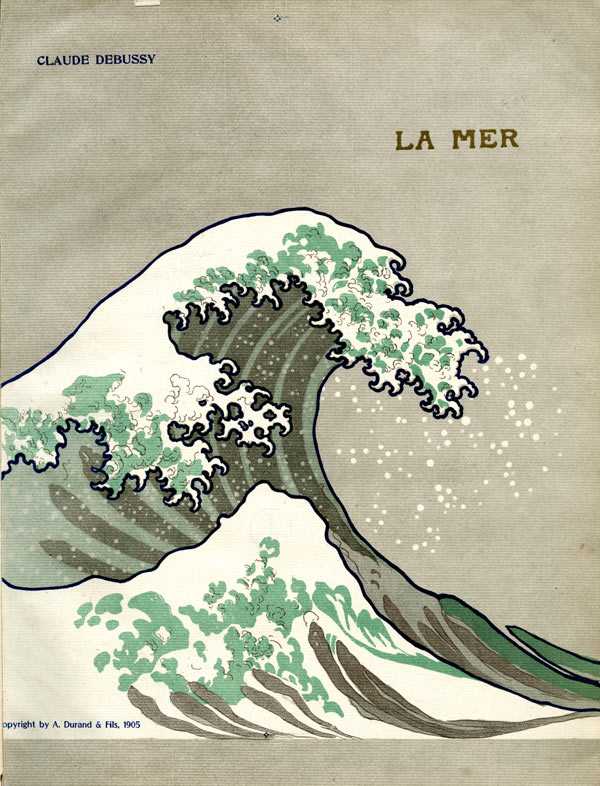 As it happens, today’s date — 15 October — isn’t one of those dates I sometimes write about: you know, the kind that has stuck in my head for one or other music-related reason, and which I like to use as a ‘peg’ on which to hang a few thoughts and an interesting clip or two. In fact, 15 October is a date to which I don’t think I’ve ever really paid much attention at all…

So why have I now spent several dozen words talking about it? Well, the answer is that I’ve just seen an online mention of the fact that, all the way back in 1905, it was on 15 October that Debussy’s La Mer — subtitled ‘trois esquisses symphoniques’ (‘Three Symphonic Sketches’) — was first performed.

Now, it so happens that, way back in the late 1970s, I encountered La Mer for the first time on one side of a scratchy old library LP that was ‘Withdrawn From Stock’ and being sold off for, I think, 30p. It was money well spent — because I immediately fell for the work (as well as the other two pieces on the record), and it has followed me through the years as a jolly life-enhancing creation. And, this being so, I thought I’d celebrate today’s anniversary — now that I know about it! — by putting together the first of two little postings connected with the work…

This first posting I will use to highlight something small that made a big impression on me when I first heard the piece; and the second — tomorrow, if I can manage it! — will give me the opportunity to share an odd and intriguing detail about which I still haven’t come to a conclusion, even though I’ve known about it for years and years, and discussed it with enthusiastic Debussy fans in various talks and classes.

What I’m talking about is something that in musicology is termed ‘cyclic structure’: the technique that sees a musical idea belonging to one movement being made to reappear in a later movement. (Yes, ‘cyclic’ is a daft term for such a thing; but I was never consulted, so don’t blame me.) Now, I was only a kid in those days, but I knew perfectly well from my own listening that some pieces didn’t do it, and others did (I’d noticed, for example, that Holst’s The Planets didn’t do it at all — whereas Liszt’s A Faust Symphony hardly did anything else). What I hadn’t quite realised until I heard La Mer is that Debussy could be remarkably prodigal and surprisingly parsimonious at the same time: various long and memorable ideas might be used once and never heard again — whereas relatively short and seemingly tangential thoughts could recur, very unexpectedly, in later movements.

Here’s an example of what I mean. In the first movement, not long before the end, we hear the following idea — which has always sounded to me a little bit like a hymn- or chorale-tune:

I think that is a marvellously majestic idea — yet, believe it or not, that’s all you hear of it in that movement. Two movements (and 11 minutes) later, though — by which time the listener may have forgotten all about it — there is a brief but repeated echo of it in the middle of the finale…

Now it seems to me that this reappearance is actually a pretty shrewd piece of composition. Not only is the quiet recall a gently mysterious reminder of an idea we heard two movements ago, but by bringing it back in the middle of this particular movement Debussy is preparing both the listener and the structure for a later, and very decisive, third appearance. Think about it: with the idea quietly re-emerging here, its additional reappearance four minutes later is far less likely to seem bafflingly senseless to the listener — and, partly as a result, is far less likely to create the impression that the structure has simply fallen to pieces. As for what happens in that ‘additional reappearance’, though, I’m going to remain stubbornly silent: if you really want to know what it’s all about, you can listen to the whole piece in the video that follows. I don’t think our chorale’s third appearance is something you’re going to overlook, frankly…

In fact, even if you’re not specifically interested in ‘cyclic technique’ and what it can achieve (and, let’s face it, it’s not for me to say that you ought to be), you might still like to listen to the whole piece on what you could say is its 111th birthday.

If you do want to listen to it all, you may find it worthwhile to know that Debussy gave the movements descriptive titles:

The only other thing I would wish to add by way of preparation is that a couple of months before the work was premiered, Debussy put the finishing touches to his score while staying at the Grand Hotel in Eastbourne. Yes, really.

One thought on “Sea Here…”