Believe it or not, I’m not quite finished with the tiny email sent by Tim this morning in response to my posting of last night. Sounds a tad obsessional, I know; but the various interconnected issues — what cultural TV programmes the BBC should be making; the level of quality to which it should aspire; what kind of ‘value for money’ it should deliver — seem to me to be highly important topics that aren’t discussed elsewhere else with sufficient honesty or realism.

So, sorry to everyone who’s arrived at this posting expecting something about Le Sacre du Printemps: it’s about the BBC — and is therefore mis-titled. I really ought to have called it The Wrong Stuff…

Let’s start with a look at some elementary facts — concerning the basic issue of cost. Here’s a helpful graphic from a recent article in the Daily Telegraph (whose own discussions of the BBC display the kind of concern for reasoned reflection normally only seen in an angry lizard). As it shows, the BBC’s total TV budget is a whopping £2,400 million, with £1,400 million going on BBC One alone: yes, BBC One eats up more than 58% of the total TV budget: 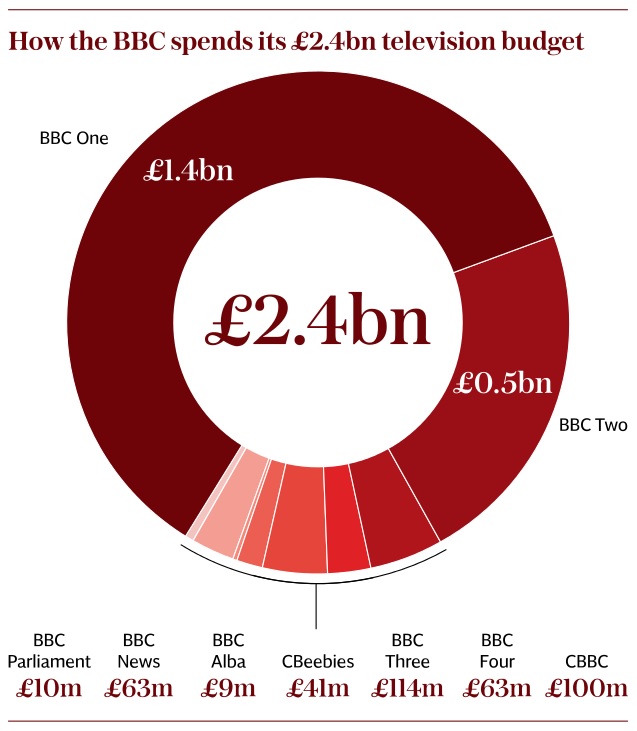 What is BBC One for? Well, according to the channel’s Service Licence,

‘BBC One’s remit is to be the BBC’s most popular mixed-genre television service across the UK, offering a wide range of high quality programmes. It should be the BBC’s primary outlet for major UK and international events and it should reflect the whole of the UK in its output. A very high proportion of its programmes should be original productions.’

Pretty clear so far. Now let’s play the ‘schedule game’ one more time, and see what an average daily spend of close on £4 million is getting us on this Spring Bank Holiday Monday (click the graphic for a full-size image): 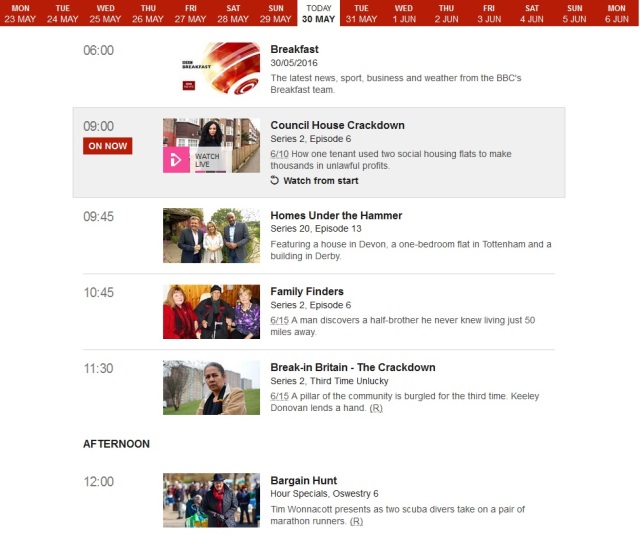 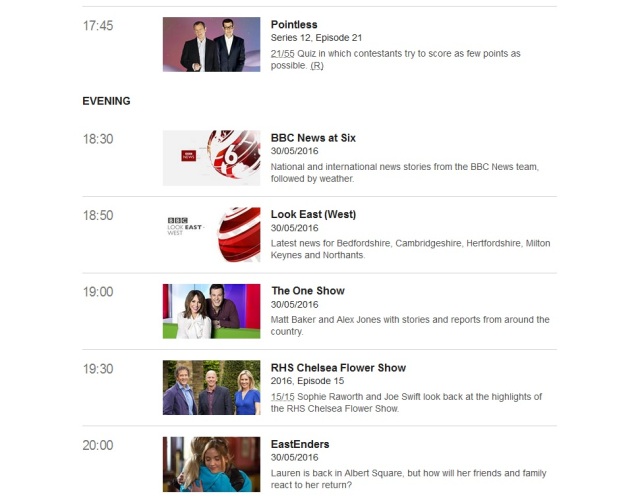 I don’t know about you; but to me that looks like pretty lousy ‘mainstream’ television for a Bank Holiday, however good the 90-minute Shakespeare

adaptation turns out to be. And note, by the way, that the BBC’s famously impartial news service (currently working tirelessly to blank the breaking story summarised in this graphic: click to enlarge) is funded separately — which means that the 13 1/2-hour non-news part of the BBC One schedule comes in at an average of £1 million for every 3 1/2 hours…

(If you want to go back to the corresponding Bank Holiday Monday of 1996 so as to see what ‘BBC 1’ was showing then, you can go here: I choose the year at random, and add the link without comment; anyone who wants to post their thoughts is very welcome to do so. And, no, I am not suggesting that 1996 was any kind of ‘golden age’.)

But, of course, no-one is ‘forced’ to watch BBC One. You can, for example, do what I do nowadays — which is not to watch the BBC at all unless I have a specific reason to study its shenanigans or seek out something it has done — or you can enjoy all the wonderful ‘choice’ that the BBC offers in the form of all the other channels it has. And surely ‘BBC Four’ will be the place for us to find cultural broadcasting? After all, according to that channel’s Service Licence,

‘BBC Four’s primary role is to reflect a range of UK and international arts, music and culture. It should provide an ambitious range of innovative, high quality programming that is intellectually and culturally enriching, taking an expert and in-depth approach to a wide range of subjects.’

Meanwhile, here is the reality. Brace yourself before you look, because it isn’t pretty…

I know I must be a terrible bore when it comes to the topic of the utter fraudulence of BBC Four; but how on earth can such an evening’s broadcasting be justified on a channel such as BBC Four is supposed to be? For a start, there is — no, you’re not ‘seeing things’ — the screening of a Steven Spielberg movie: where does it say that this channel should be throwing away 2 1/4 hours of its limited time (and heaven knows how much of its limited money) on a corporate-owned mass-entertainment product? And look at the rest of this festival of self-repetition. Where is the ‘range of UK and international arts, music and culture‘? The only culture I see in that schedule is — as usual! — the corporate-owned culture of commercial pop music. Where is the ‘ambitious range of innovative, high quality programming that is intellectually and culturally enriching‘? Do we get that from yet another BBC programme that seeks to normalise a happy acceptance of state-military violence? Where is the taking of ‘an expert and in-depth approach to a wide range of subjects‘? Is that what we get from programmes about thrushes and weather forecasting? Or from seeing Dan Cruickshank’s rictus of amazement now filmed against a backdrop of medium-density housing? And, for probably the hundredth time: where is the classical music…?!?

But such questions need to be viewed in the context of that helpful Telegraph graphic and the figures it contains. Take another look: I wasn’t joking when I mentioned ‘limited money’. Since BBC Four is supposed to be fulfilling the remit outlined in its Service Licence on an annual budget of £63 million, it isn’t really surprising that the channel is a broadcasting farce: the 7 1/4-hours of non-news programming you see above is what comes from an average daily spend of just £173,000.

If Tim wants to send me another message (and I hope he will!), perhaps he’ll answer the following, completely non-mischievous question: If you think we need the BBC because of the terrible hole there would be in our cultural broadcasting if it went, do you think that ditching BBC One and BBC Four would show that hole opening up?

As far as I can see, the main result of getting rid of these two channels would be to allow around ten million licence-fee payers to have their money back…