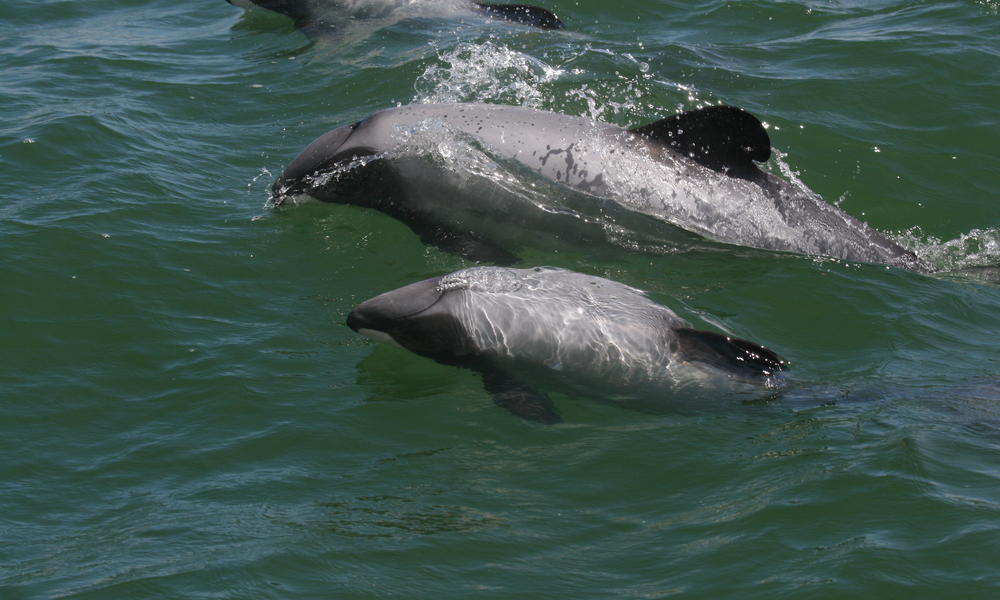 Scientific research tells us that dolphins are intelligent creatures; but as far as I know, there’s no evidence that they’ve developed any understanding of population dynamics. And, in the case of Maui’s dolphin (Cephalorhynchus hectori maui), that’s probably a good thing: with a recent ‘abundance estimate’ deciding that only around 55 Maui’s above one year old were left in the world, the outlook for this smallest and rarest of dolphin species is surely pretty bleak.

Now, I’m not any kind of expert when it comes to endangered cetaceans; but the more I’ve searched for information about the Maui’s, the worse their situation seems. Maui’s apparently have a relatively short lifespan (20 years or less), with females starting to calve at 7-9 years of age and producing only one calf every 2-4 years. If (as I’ve seen suggested) they are only able to grow their numbers by 2% per annum, a population of 55 will increase by just 1 individual each year. And with an average of 4.95 Maui’s apparently being killed annually by netting and trawling alone, it’s small wonder that a succession of surveys (using unfortunately different and incomparable methods) show a decline in numbers from almost 2000 to around 50 over four decades — with 134 being recorded in 1985; 100 in 2004; and those 55 in 2012. The most ‘optimistic’ projection (see here), published in 2014, indicates that in as little as 15 years from now, the Maui’s might be reduced to having only three breeding females — and will have reached the ‘tipping point’ of functional extinction: whatever the total number of individuals alive at that time, and however young or healthy they may be, the door to the future will have closed.

If anyone is feeling a bit mystified at seeing the plight of Maui’s dolphin discussed in what is supposed to be a classical music blog, things may be a bit clearer once we’ve pondered how daily life must look from the point of view of the average member of that species. Since Maui’s tend to live in small and shifting groups of same-sex companions, an individual’s everyday experience will probably seem remarkably stable across its lifetime, even as the numbers dwindle. With dolphins to the left, and dolphins to the right, there’ll be no shortage of contact and communication — while the disappearance of groups from other locations won’t be any part of any Maui’s direct perception: by definition, there won’t be any dolphin observing what happens in places where there are no longer any dolphins.

And by now the relevance of the unfortunate Maui’s will, I hope, be apparent. (If it isn’t, just keep reading: all will be revealed…) Yes, I am returning to the topic of the declining and marginalised culture that is our world of ‘classical music’ — and to my concern that the entire tradition has reached (or is about to reach) a ‘tipping point’ that is a cultural equivalent to the functional extinction of a biological species. The reason I’m dragging doomed dolphins into the picture is that I’ve now had quite a wide variety of reactions to my earlier postings on the subject — and have noticed something rather intriguing about what has been said.

In all, I’ve had about five dozen bits of feedback from a seemingly very broad range of people — strangers as well as friends; composers and teachers as well as performers; writers and music-lovers as well as lunatics and internet trolls — and if I am to be honest, I have to say that more than half of this feedback has actually been dismissively and even angrily negative. But if I allow myself to count only the thoughtful and literate reactions — i.e. ignoring all the emptily insulting knee-jerks of the ‘your [sic] an idiot, people have been saying this for centuries’ variety — the ratio changes to about ’50/50′; i.e. just about as many serious-minded persons have said they think I’m right as have tried to tell me that I’m wrong.

Now, these statistics are, of course, worthless — no sample this small and so dominated by people who were either self-selecting or chosen and pestered by me personally can provide anything other than a bit of illustration — but, looking at the feedback from people active in the musical world, it’s hard not to wonder if something besides essential ‘optimism’ or ‘pessimism’ can be discerned that might be responsible for determining one reaction as opposed to the other. And, as it happens, I think something can…

In as few words as possible, there seem to be two dominating variables involved in the reaction of a musically trained and (in the widest sense) musically active respondent: (i) whether they are based and active in London, and (ii) whether they are busy and successful professionally. And the way they appear to function is as follows. If you are a composer, teacher, performer or writer who is scrabbling for money and work, then you’ll agree with my thesis, wherever it is that you happen to live. If, on the other hand, your diary is full; your reputation is made or growing; and your profession-derived income is sufficient to your needs, then you’ll agree with me about classical music’s ‘functional extinction’ if — and only if — you don’t live in London … because if you’re doing okay (or better than okay) and your life and work are centred on the capital, the data indicates that you’ll be in the group that is inclined to tell me that I’m talking through my hat (and you may, in fact, have done so already).

That really does seem to be the best and most parsimonious interpretation of the data-set I have so far (and so informally) collected. Thus, when shown my postings about our repertoire’s ‘functional extinction’, busy and famous pianists and violinists up in the North West and North East told me I was dead right — while busy and famous pianists and violinists down in South London said I was dead wrong. Among composers, my thesis was derided as arrant and even corrosive nonsense by busy and successful figures in London — and accepted as plausible at the very least by some busy and successful composers in the regions and by little-recognised, struggling, and part-time composers literally everywhere. In fact, the pattern even extends beyond the UK’s borders: one of the most positive endorsements of my analysis came from a busy and successful composer living and working in … Los Angeles.

I’m not, of course, ‘having a go’ at successful musical people who live in London — among whom are several dear friends I wouldn’t be without. I’m just pointing out that they can only see what they can see — and, if they’ve managed to make it to the ‘big time’ in the form of ‘insider’ status in London’s frenzied and intensely competitive musical mêlée, what they see is the inside of a bubble. Since they are busy and successful in one of the world’s major cultural centres, they are living lives packed with invitations, commissions, performances, publishers, festivals, accumulated and ongoing ‘residencies’, broadcasts, recordings, talent from all over the world, talks, gifted pupils, streams of committed students and graduates, domestic and foreign travel, and all the rest: not just their working days, but their evenings and weekends will likely be spent in contact with people who are busy and successful to precisely the same extent, and in precisely the same fields. Just like Maui’s dolphins, therefore, they are clustered in shifting and homogeneous groups whose every member is fully and excitedly occupied with what’s going on around them — and, just like Maui’s dolphins, it’s a fact true by definition that they aren’t spending their time in places where none of those things is happening. With colleagues to the left, and colleagues to the right, it really will appear that everything is as it used to be, and as it ought to be; that those who ‘die off’, professionally speaking, are those who simply weren’t good enough; and that an annoying nobody like me is some distant ‘outsider’ who hasn’t the faintest idea what he’s talking about.

The problem, in other words, is London itself — that belated imperial monstrosity whose super-massive concentrations of wealth and privilege exert such a distorting, perverting effect on every aspect of British life and society. It’s London, after all, where central government spending on arts and culture amounted to £69 per resident in 2012-13: precisely 15 times as much as the pitiful spend of £4.60 per person across the rest of England — where 85% of the population actually lives (source — and other horrifying statistics — here). It’s London that has no fewer than five orchestras — the BBC Symphony; the London Philharmonic; the London Symphony; the Philharmonia; and the Royal Philharmonic. It’s London, exclusively, that hosts ‘the BBC Proms’ for eight whole weeks every summer (the ‘Henry Wood Proms’ until the BBC’s unreported titular coup d’état the other year). It’s in London that we find two world-class opera houses — the Coliseum and Covent Garden — located less than 500 yards apart. And it is, of course, in London that the BBC is headquartered; where Ofcom is located; where Arts Council England has its ‘National Office’, etc, etc, etc…

In short, it shouldn’t surprise us in the least that people living and working successfully in that wholly unreal and unrepresentative bubble of institutional largesse and publicly funded patronage haven’t been able to see the sense in my diagnosis: they’d need to spend a lot of time doing other things in a lot of other places to be able to form the straightforwardly clear and accurate picture of musical and cultural reality that my contacts in Yorkshire, Wales, or the West Country have developed as a matter of course. As the Prince of Denmark well knew, it’s not at all impossible to be ‘bounded in a nutshell’ and yet consider that what you survey is ‘infinite space’. All those busy and successful ‘London insiders’ will no doubt go on insisting that everything is just fine — because it is. For them. For now.