Not Beyond Our Ken…

I daresay it’ll take interested readers another day or two to make their way to the end of those videos of Fall of Berlin (1950) in search of all the music contributed by Shostakovich — so let me ‘tread water’ a little with a lightweight, single-issue posting that relates to another, much shorter Shostakovich-related clip I posted a few days ago.

As it happens, the British director Ken Russell (1927-2011) is a film-maker about whose work I have a jolly lengthy list of complaints. Obviously, it’s not for me to say what kind of films someone should or shouldn’t make — I’m not a Zhdanov, after all; and wouldn’t want to be — but I do very strongly believe that more than one of Russell’s films that took a composer as its subject did serious harm to the reputation and reception of the creator concerned.

If anyone wants to know what my lovingly detailed charge-sheet looks like, then maybe we can come back some other time and discuss Russell’s cinematic and televisual mis-treatments of Liszt, Tchaikovsky, Mahler, Strauss, Bruckner, Martinu, et al. What I want to do here and now is give Russell credit for the way that he can — when he isn’t making a great artist seem either deranged or imbecilic — display real musical sensitivity in the way he controls the pacing and cutting of the sequences that fit across the stretches of music he borrows.

I’d hate that last sentence to sound like some abstract piece of dinner-party verbiage, so let me straight away illustrate what I mean, by way of two examples.

The first is from Savage Messiah (1972), Russell’s film about the artist and sculptor Henri Gaudier-Breszka (1891-1915). To me, it’s among the less objectionable of Russell’s artist biopics (though, as so often with him, it’s exhaustingly full of people SHOUTING AT EACH OTHER) — and, concerned as it is with a French-born figure, it quite naturally uses a stretch from Nuages (‘Clouds’), the first of Debussy’s orchestral Nocturnes (1897-9), to accompany what is presented as the artist’s first (but posthumous) exhibition: 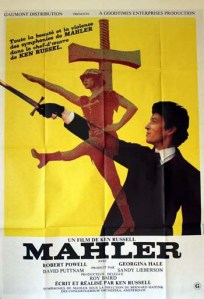 The other example I want to include is from Mahler (1974) — Russell’s evident attempt to further complicate the public’s relationship with a composer they had only recently seen turned into a pederastic stalker in Death in Venice (1971; needless to say, Russell explicitly references Visconti’s filmic libel during the course of his own).

The clip I’m showing comes at the point where one of Mahler’s young daughters has died (a tragedy that really happened, in 1907), and we see the composer playing — and apparently making a small change to — one of the five Kindertotenlieder (‘Songs on the Death of Children’) he’d written a few years earlier (1901-4). Russell shows his Mahler (Robert Powell, of course) playing an idea from the third song at the same time as we hear him speaking the words of the first verse in a voice-over. It’s all filmed in just two shots — with the camera pulling back in each one. I’ve regarded this film as a disaster — and, frankly, a disgrace — since pretty much the moment I first saw it (in a censored TV version); but the power of this one tiny scene — with the music reduced to almost nothing, but remaining the principal formal component! — has always stayed with me:

The reason I bring all this up relates to something Russell did in that clip from Billion Dollar Brain (1967) that used part of Shostakovich’s ‘Leningrad’ Symphony. There are many  striking images in that little sequence — the ancient castle where Midwinter addresses his army; the uniformed and helmeted soldiers turning and running to their ‘oil truck’ transporters; various glimpses of the ‘pathfinder’ units crossing the Latvian snow, etc — but the moment that is the most decisive in visual as well as dramatic terms is the point where — following Midwinter’s instruction “Give the order to advance!” — we see the massive transporters themselves start to move. At that moment, the heavy machinery is finally in motion, and the invasion is ‘on’. And that moment of action, you may have noticed, is placed by Russell at exactly the point in the score where Shostakovich himself makes his music ‘move’ for the first time — by way of a wrench from the undeveloping development section’s previously unrelenting E flat  major into a key where the harmony says A major but the melodic line insists on the G and F naturals of A minor. Starting the vehicles here has always seemed to me to be precisely the right thing for Russell to have done — and the sort of thing that you’d never think of doing unless you really knew what you were about, musically as well as filmically.

Have another look at it — and note, when you get there, that Russell even co-ordinates the revving of the engines with the tonal change in the music:

Now, if you’re someone to whom this was ‘obvious all along’ (and, let’s face it, it’s hardly going to be the case that I am the only person ever to have paid this kind of attention), you may be feeling that I’m wasting everyone’s time by pointing to this. But you’d be surprised at what I’ve found in the numerous classes and courses I’ve taught on film music over the years. You see, wherever possible, I’ve tried to get people in these classes to compose — or, if they don’t write and won’t improvise, to select and synchronise — a piece of music suitable for one or other carefully chosen sequence. The results have normally been genuinely impressive in most respects: it’s apparent that, as a culture, pretty well all of us have absorbed a highly sophisticated grammar — and possibly even more than one grammar! — of musico-visual relatedness and relevance. Except, that is, where tonality is concerned.

Yes, literally the only respect in which I’ve ever had to express complete bafflement at an aspect of a composed or selected soundtrack brought into the classroom is in regard to key and changes of key. To take an extreme example: the most obviously gifted of all the students I’ve had in my film music courses was a guy who was already writing his own film music for fun. (Hi, Graham, if you ever see this!) At one session, late in the course, he brought in a bit of score he’d written to match a sequence from his video of the BBC series Walking With Dinosaurs (1999) — a scene in which a whole computer-animated herd of massive quadrupeds from the Upper Jurassic is seen from the air as they migrate across an open primaeval landscape. And while Graham had come up — as he always did! — with a perfectly decent tune that had all the appropriate qualities of expression and pace and mass, the entire sequence was in the same key throughout. Classroom discussion of the audience’s potential ‘cognitive dissonance’ at seeing co-ordinated and large-scale movement from one place to another while hearing music that remained ‘rooted to the spot’ in terms of its diatonic scale and the chords to which it kept returning didn’t really get us anywhere — so in the end I got him to email me his sibelius file so I could copy and paste the tune’s different statements into different keys: this one up three semitones; that one down four semitones, and so on.

Whether any of that can be taken as an indication that an awareness of ‘key structure’ and ‘tonal movement’ has to some extent dropped out of many people’s instinctive sense of musical ‘perspective’ I don’t know. But if it’s a problem for many folks now — even musically creative folks! — at least it wasn’t a problem for Ken Russell. For all my ethical objections and reservations, I think it’s pretty clear that he was a master of his craft.

If you like this posting — or any of the others to be found on this blog — please feel free to share it with people! You can email the link to a friend, post it on your Facebook page, or even send it out in a tweet! Just pass it on to someone who might appreciate what I’ve written — or put it in a place where the right person will find it! And remember to click the ‘Follow’ button as well! Thanks